Today, I was listening to some old-school Dio, and I had a thought.  A sudden thought that I wanted to explore:

Yeah!  I think it’s true!  I was sick at home for a month (at least) too tired to do anything except record videos on the Pepsi Power Hour!  I was inundated with a steady intake of incredible songs, in many cases for the first time.  And because I still have the old VHS tapes, I know exactly what’s on them.  This brief but intense period of my life was rocked by this soundtrack, over and over again:

Spinal Tap – “Hell Hole”, the theme song that my sister and I dedicated to our old Catholic grade school!

These songs were first impressed upon me during that period, the visuals always cool and intriguing to me.  Especially Lee Aaron.  Ahem.  Anyway.  I watched these videos over and over again.   I recorded the audio (in mono) (…hah, I made a pun!) to a cassette so I could listen to them on my Walkman.  This came in handy at the cottage.  We didn’t have a VCR or cable there, so the only way to bring my songs was to tape them from the TV.

That one intense period of being stuck at home with nothing but heavy metal heroes might have made me the LeBrain I am today.  I’m glad something good came out of it!  I couldn’t even go swimming that entire summer! 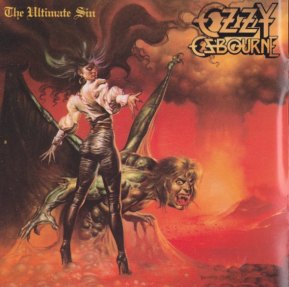 I know Ozzy isn’t especially fond of this album (or anything about the whole Jake E. Lee period) but I love it.  Hell, Ozzy hasn’t even offered it in any of his reissue programs.  It’s out of print, and Ozzy never plays any of these songs anymore outside of “Shot in the Dark”.

I don’t know why I love it so much.  I get why some people aren’t fond of it.  Ron Nevison butchered the production, for one thing.  Randy Castillo was such a powerful drummer, with a recognizable style.  Here he sounds plastic with awful sounding cymbals.  It’s a shame because the drum parts themselves are great.  Ozzy acknowledges being in a real “down” state at this time, and it shows in the tired vocals.

Yet I love it!  Maybe it’s Jake E. Lee, who is incredible.  He’s flashy in that 80’s way, but with balls.  He’s not just fluttery solos, although he certain can do that.  His riffs are choppy his fills stunning and classy.  I think Jake was a great replacement for the late Randy Rhoads, even though his true self wouldn’t shine through until Badlands.

I like every single song.  The title track, “Secret Loser”, “Fool Like You”, “Lightning Strikes”…these are punchy Ozzy rockers.  They are well written songs, and longtime contributor Bob Daisley has credits on 8 of the 9 songs.  To me, that speaks to a certain level of quality.  Verses and choruses are strong and melodic.  The guitar riffs, solos and fills are all equally catchy and adroit.  Even one of the less interesting songs, like “Never Know Why” is still listenable today due to the catchy melody, and Jake’s flange-y guitar part.

Many of the songs such as “Thank God for the Bomb” and “Killer of Giants” return Ozzy to the anti-war stance that Black Sabbath took in the 1970’s.  I remember the 80’s clearly, and it seemed like every other week, there was a TV documentary or movie about the Soviets and the nuclear threat.  To me as a kid, Ozzy’s voice of protest eased my mind! Surely, Mr. Reagan and Mr. Gorbachev would listen to Ozzy? “Killer of Giants” is quite an achievement musically, going from electric to acoustic to heavy all with Jake E. Lee at the rudder.  It’s an awesome song.

The big hit and first single was the last song, “Shot in the Dark”.  This is bassist Phil Soussan’s only writing contribution on his only Ozzy album.  Later, he’d go on to co-write the excellent Vince Neil album Exposed, which proved he wasn’t a fluke.  It’s a great mid-tempo rock song, although the video used to kinda frighten me as a kid.  Frighten and titillate all at once.  I was 13.

And on the topic of “Shot in the Dark”, why did bands in the mid-80’s always seem to wear sequined bathrobes? I’m looking at you, Mr. Simmons circa 1986…

I look at The Ultimate Sin as a 5/5 in terms of songs and musical performances.  I’ll dock it 1 star for Ron Nevison’s clunky production and Ozzy’s tired lungs. 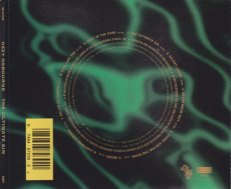 And maybe this is a good time to rant about these fucking 1995 Sony 22 BIt SBM Digital Remasters.  Oh, I have no problem with the sound of this CD.  It’s the fucking covers!  Why did they crop the awesome artwork and put that dumb OZZY along the side?  My Lord.  I had so many customers (Gord and Glen specifically) who refused to buy these remasters because the cover is dumb.  Not to mention putting the tracklist in a circle on the back cover, making it annoying to read.

“I got some cool new bands,” said Bob one day after school.  He had been working at the nearby Harvey’s restaurant and had been exposed to some unfamiliar music from his co-workers.

“Have you ever heard of Christian rock?” he asked me.

“Yeah,” I answered.  “Stryper are Christian rock.  I like Stryper.”

“Well,” Bob explained, “I taped all the best songs by two awesome bands:  REZ and Darrell Mansfield.  REZ is short for Resurrection Band.  Darrell has this awesome song called ‘Thunder and Lightning’.  You have to hear it!  It is so cool.”  Bob then sang the chorus to me.  Sounded good.

The songs he, and soon I, were enthralled with were as follows:

Darrell Mansfield:  “Thunder and Lightning”, “After the Storm”.

Bob taped them from a guy at Harvey’s, and then I taped them from him.  I had a third generation tape, which I played over and over.  We played the hell out of those three REZ songs.  They were absolutely incredible songs, and the lyrics were cool too.  They didn’t come across as “overtly” Christian, but all had positive messages.  Bob particularly loved “Shadows”, and a brilliant song it was.  He loved the lyrics, as Bob and I were both very anti-drug:

The lyrics mentioned “angel dust and tortured dreams”, and we knew what had happened to the subject character of the song.  It focuses on the friends and family left to carry on.  But before too long, an uplifting chorus:

For a little while, we had a new favourite song.

We didn’t know the name of the singer (Glenn Kaiser), but his gravelly voice was a cross between Bob Seger and Rod Stewart.  He was our new vocal hero that spring.  Now, if only we could hear more by REZ…

By this time, my old cassette tape with the REZ songs was unlistenable.  Because of this I hadn’t heard anything by the band in many years.  I had been working at the store for four years, but never saw any listing for this band.  But T-Rev had a tendency to check out-of-the-way places for CDs.  Downtown Kitchener one Sunday afternoon, we were checking out a new local pawn shop.  In their $1.99 CD bin, I found an interesting title: I believe it was called Inspirational Rock.  It struck my eye immediately because one of the included tracks was “Shadows”, by REZ.  It was an automatic purchase.

I closed the door and hit play.  A single haunting, acoustic guitar played a dark melody.

You, you chase the shadows,
Because your hopes and dreams have been lost in the night.

Once again, I had a new favourite song.

I learned that Between Heaven ‘N Hell, by REZ, was finally issued on CD, 23 years after its initial release!  Amazon.com had it for a reasonable price, and of course I had to have it.  For the first time in almost two decades, I had the chance to hear “2,000” and the anti-apartheid track “Zuid Afrikan” once again.  And they were just as good as the first time I heard them.  I found other standout tracks as well, such as the scorching “I Think You Know”.

I was surprised to find that the band had a second lead vocalist, Wendy Kaiser.  In fact she’s on the front cover!  Her songs tend to be more new wave oriented, but she does rock out on some, like “Save Me From Myself” and “Nervous World”.  Unfortunately, her voice is not to my taste, so I tend to gravitate solely to the Glenn Kaiser songs.

The final song on the album is “2,000”, one that Bob and I used to rock out to all those years ago, in the parking lot of Stanley Park Sr. Public School on Hickson Ave. in Kitchener  We’d pop like 14 D-cells or something like that into a ghetto blaster, grab a basketball, and shoot some hoops while listening to “2,000”.  We loved the futuristic, echo-y vocal.  This was an anti-nuclear weapons song, much like Ozzy was doing around the same time on his Ultimate Sin album.

Shame this one wasn’t a scorcher all the way through.  Still, it has enough positive rock power, gritty but powerful choruses, and memorable songs to earn a passing grade.