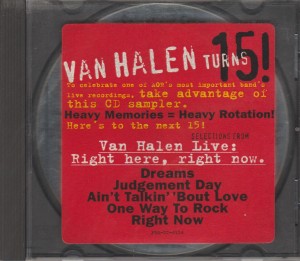 Stuff like this is in my collection not because it’s valuable to me, but because at one point in time I got it for free.  We ran across promos like these all the time, and couldn’t sell them, so they were free to take.  Because it was Van Halen, I hung onto it even though all five tracks are taken from the live album Right here, right now.  It disappears in your CD collection due to the jewel case without a back cover or spine.  For the sake of simplicity (and a shorter title), we’ll just refer to this EP as “Van Halen turns 15”.

It actually plays really well.  Without any filler or solos, it’s a tight CD packed with some of the best songs.  “Dreams” serves as a connection to the earlier pop rock sounds of 5150.  Live, it rocks with higher octane than the studio version.  “Judgement Day” was one of the better representations of the then-new For Unlawful Carnal Knowledge material.  Its modern groove was predictive of the kind of music people would want to hear in the 90s:  heavier with more edge.  “Ain’t Talkin’ ‘Bout Love” is the one token DLR track, and then seemingly to balance things out, it’s Sammy’s “One Way to Rock”.  Whatever — the listening experience is perfect.

Because “Right Now” was the biggest thing since Crystal Pepsi, it’s inevitable that the live version was included on this CD.  If you find “Right Now” to be vomit-inducing, you can just hit stop.

Since this is a promo and should only be sought as a freebie, appointing it a score out of 5 stars is meaningless.   Radio stations are always ditching boxes of old CDs so it’s bound to turn up somewhere. 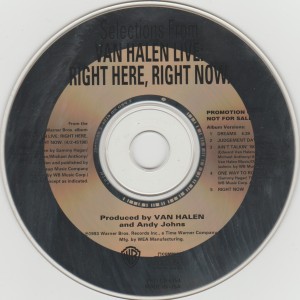 Keeping up with new releases is challenging for anyone.  Today, every band is releasing a box set, live album, compilation, EP, or even (gasp) new material!  This is not a new phenomenon.  As a young collector in an earlier time, 1993 was particularly challenging.  I was suffering from “live album burnout” due to a number of double lives that year.  I dutifully picked up the most important ones to me, as much as I could afford.

I plotted things out.  The first batch of live albums on my radar that year were as follows:

Four of my favourite bands in one brief chunk of time, with two of the four being doubles.  I had to budget this out somehow. 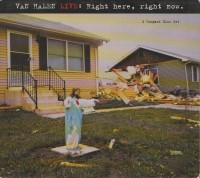 I’m not sure when I bought Van Halen’s album, but I most likely bought it first.  The dual CD set was at Costco for thirty-something bucks so I put it in the cart.  I know it was early in the year because I remember listening to it in the car while driving to school for final exams, which occur in April.  Specifically I remember listening to the live version of “Cabo Wabo” on my way there.

I found the Van Halen album underwhelming.  Too much stuff from For Unlawful Carnal Knowledge and some clattering solos made it a struggle to finish in one sitting.  Sammy Hagar would later comment that the album sucked because too much of it was re-recorded in the studio.  I just thought it was a drag.

Kiss were (and are) my #1 band, so I dutifully bought it as quickly as I could.  I didn’t get it on the day of release (May 18), but I do know the exact date that I purchased it:  May 20.  I know this because I remember that we had to get home from the mall (Fairway Park Mall’s HMV store) in time to catch the series finale of Cheers.  I got the free poster with my cassette copy.  I chose cassette for strategic reasons.  Double live albums were a bigger investment, so I liked to get those on CD.  I was already starting to distrust the cassette tape format.  I’d hate to buy a double cassette set and have one of the tapes go bad.  Alive III was a single tape, so I went for that and stayed with that until I got a double vinyl reissue a couple years later. 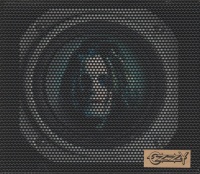 The Ozzy was a limited edition package.  I needed that special grille cover with the two “tattoos” inside.  I couldn’t afford it so I put it on my birthday list.  I accompanied my mom to HMV to make sure she got the right one.  Killed the surprise, but also the anxiety of not getting the exact version I “needed” for my collection!

Ozzy Osbourne had already supersaturated the market with live albums, and his was tedious to listen to.  I gave it more it than a fair shot, as I wanted to really hear how Zakk approached the live versions differently than Randy or Tony had.  It was an exercize that paid minimal dividends, wading through minute after minute of numbing “extra extra crazy” Ozzy monologues.

I decided to hold off on Iron Maiden as long as I could.  The idea of a single disc live Maiden album was a little off-kilter for me.  An album of tracks from 1986-1992 didn’t sound all that appealing to me.  Maybe I should wait until the second disc, due in October, came out so I could listen to both equally.  Maybe I should skip A Real Live One entirely.  The album seemed a hasty entity, being released so Maiden could tour to support new product.  The cover art was also lo-fi sketchy, compared to predecessor Live After Death.

Good or bad, I decided to hold off on Maiden for the time being.  I had enough live metal to digest anyway.

Kiss was the only album I was happy with, though it was clearly an inferior offering to Alive I and II.  Unlike Osbourne, it wasn’t too long, and kept the filler to a minimum.

When the next batch of live albums rolled out, I was weary.

The Bon Jovi live disc came with a pricey special reissue of Keep the Faith, a limited edition.  I immediately put that one on my Christmas list and did my best to pester my mom into buying it.  I had to make a decision about the others.  I scratched Satriani and Testament off my list.  They weren’t going to be priorities this time.

As for the final call on Iron Maiden?  The decision was made for me when I found Live at Donington, once again at HMV.  What was this?  It looked like a bootleg, but wasn’t.  It had no liner notes.  Absolutely bare minimum packaging.  Nary an Eddie in sight.  It was a “limited edition“, and a double CD with a complete concert.  The easy choice was to buy this instead of the other two albums.  For the time being, at least.  I finally did get all three albums, when I was working at the Record Store, in 1996.  The Boxing Day sale enabled me to get both live Maidens and the recent Tesla greatest hits for a reduced price.  It took me three years to get ’em!

That busy 1993 list doesn’t include live home videos released that year (Ozzy, Van Halen, Bon Jovi, Kiss) or the albums that I didn’t even know about (Live Cult).  I had to draw the line and audio has always been my priority over video. 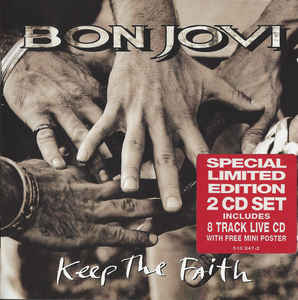 Do you remember what live albums you bought in 1993?  Comment below! 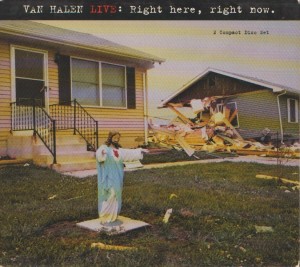 The summer of ’93 was the “Summer of Live Albums” here at LeBrain HQ.  There were many live discs out to digest, several of them from “must-purchase” bands.  Most notable was Ozzy’s Live & Loud which came in a metal speaker grille cover.  Iron Maiden also put out A Real Live One, the first of a two-album live set.  And then there was a big’un:  Van Halen’s first live album, the double Right here, right now.

What did all three releases have in common?  They were all boring duds.

Sad but true.  In Van Halen’s case, the disappointment was acute.  Sure it was “Van Hagar” and not the “real deal” if you believe in that  sort of thing, but that wasn’t the issue.  There are a few problems with Right here, right now but none of them have to do with the singer.  The setlist is a real drag, with way too much material from For Unlawful Carnal Knowledge.  10 of the 11 songs from F.U.C.K. are on this album!  (“The Dream is Over” being the only missing song — you had to buy this on VHS to get it!)  A F.U.C.K. song opens the set, another closes the set…it’s too much, especially since F.U.C.K. was (one of?) the weakest Halen albums to date.

Issue #2 is perhaps a bit silly, since Van Halen shows are known for their solos: but this album has too many solos.  Eddie’s aside; he always going to blow your mind.  Unfortunately, Michael Anthony and Alex Van Halen are, quite frankly, boring soloists.  Did “Ultra Bass” need to be five minutes long?  It’s best when Michael’s just playing, but as fans know his bass solo is half notes, and half noise.  Immediately after that is “Pleasure Dome/Drum Solo”, nine whole minutes.  The instrumental “Pleasure Dome” section is best since it resembles a song (a driving hard one at that).

The final major issue is one we didn’t even know about until recently.  Sammy Hagar revealed in his book Red that this album was heavily overdubbed afterwards, and I wouldn’t doubt it.  (Hagar claims that he re-sang the entire thing over again in the studio.)  There was always something underneath the surface that didn’t feel right about this album, and that could be it right there.  Right here, right now feels dulled, perhaps by too much studio polish after the fact.

It’s not all bad of course, how could it be?  “Poundcake” and “Judgement Day” start it off strongly.  Then they went and dropped a ballad (“When It’s Love”) and a shitty song (“Spanked”), and all momentum is stopped.  The duo of “You Really Got Me” and “Cabo Wabo” are pretty damn great though.  There are a couple Hagar solo tracks in set which add some spice to the mix.  The acoustic ballad “Give to Live” is just Sammy alone, but “One Way to Rock” is the whole ass-kickin’ band.  Of all the Hagar tracks the band has played live, “One Way to Rock” sounds most natural as a Van Halen song.  The final surprise is “Won’t Get Fooled Again”, which Eddie does not play keyboards on.  Instead he mimics Pete Townsend’s synthesizer part with his guitar.  Who purists will hate Sammy’s take on it, but fuck it.  It’s a pretty damn good version of a hard to cover classic.

There are a couple other decent tracks to be had.  German and Japanese versions contain two bonus tracks:  “Mine All Mine” (from the OU812 tour) and another Hagar track, “Eagles Fly”.  They can also be found on the “Jump” live single.  Unlike much of the rest of the album “Mine All Mine” has some bite to it.  It’s a great example of synthesizer working well in a hard rock song.  (Unfortunately it fades out early.)  As for “Eagles Fly”, this is a song Sammy played acoustic on the occasions he didn’t play “Give to Live”.  Although it was played less, “Eagles Fly” edges out the other just slightly by a nose.  These two bonus tracks are worth tracking down the single for, or an import version of the album.

I traded up my original copy of LIVE: Right here, right now for a US import that came in a cardboard digipack.  Although it has no bonus tracks, it does have some bonus photos, which is still pretty cool.

It’s not fun to say any Van Halen album isn’t essential, but Right here, right now is not essential. 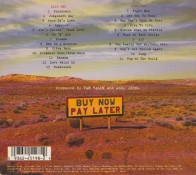 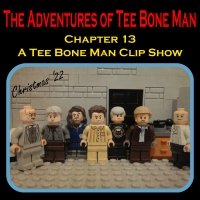 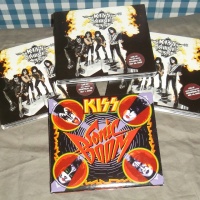 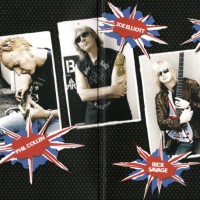 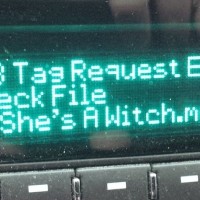 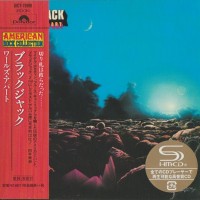