Missed the May 16 live stream? No problem. Watch LeBrain and special guest Uncle Meat below, discussing favourite Rush albums. Then LeBrain dives into Tony Martin-era Black Sabbath singles, and finally makes a surprise purchase live on the stream! We also pay tribute to Fred Willard who passed away at age 86. We’ll miss you Fred.

There has been an audio lag issue with the Facebook live streams which looks like an issue that happens when one person leaves during a split screen.  Going forward I will either have to reboot the stream at that point or use another platform.  Apologies for the audio lag.  Enjoy the show.

No theme, just stream!  Stuff planned for this week:

Weather and technology permitting, I may do this live stream outdoors.  Change of scenery!

Last week was a lot of fun, wasn’t it?  Let’s continue!  Starting at 6:00 PM E.S.T., I’ll be going live on Facebook.  We’ll catch up with some general chit chat and then we’ll delve into another batch of my favourite records. This time I’ll include 7″ singles and cherished oddball releases.

In music news we have some tragic deaths and new releases.  Have you heard the new Rolling Stones single “Living in a Ghost Town”?

YOU SPEAK, WE LISTEN!

Someone last week requested that I cover my favourite vinyl on the next live stream.  At the same time, I received some feedback that going back to a discussion format like the early streams might be fun.  I’ve decided to do a bit of both.

For today’s live stream, starting at 6:00 PM E.S.T., I’ll be talking about some of my favourite records.  Why are they some of my favourites?  We’ll get into that and more.  But we’ll start with some free discussion about whatever you want.  How are you holding up now, two months into this crisis?

I read an interesting comment about new music during the crisis.  “I’d prefer not to get any new albums at this time,” went one comment, “because I don’t want to always associate that music with this time.”

Wanna see stuff from my collection?  All you have to do is ask.  This week the request was “Let’s see your favourite box sets”.  I’ve rounded up a few for show & tell.  I will go live on Facebook April 25 at 7:00 PM Eastern Standard Time. (If you missed last week’s live stream, Rare Box Sets, you can watch it here.)

The subject matter this week is My Favourite Box Sets.  Most of these you have seen on my site already but we are about to take a closer look.  I’ll be live for roughly an hour with these awesome box sets.  Rob Daniels from Visions in Sound will be going live after I’m done so I’ll be jumping over to catch his show!

Join me tonight at 7 PM E.S.T. for some rock and roll shenanigans!  Facebook:  Michael Ladano

I hope you’ve been enjoying these Facebook live streams!  I sure have been.  This week’s stream will be Saturday April 18 at 7:00 PM Eastern Standard Time.  The idea behind changing days and times is to give different people an opportunity to watch.  (If you missed last week’s live stream, The Judas Priest Discography, you can watch it here.)

The subject matter this week is:  Rare Box Sets!  I have an armful dusted off to show off to you.  Some you may have seen on my site before, and some you might not even know existed.  I’ll throw in a rare album or two as time permits.  I plan on going for roughly an hour.  Rob Daniels from Visions in Sound will be going live after I’m done so I’ll be jumping over to catch his show!

No crazy stunts this time, but I will be trying out a new feature.  Whether it’s a bomb or not, we’ll see.  It’s called What the Hell is Mike’s Dad Watching on TV.

Join me tomorrow at 7 PM E.S.T. for some rock and roll shenanigans!  Facebook:  Michael Ladano

Disclaimer:  There will be NO half-moons this time.  I swear.  Deke is still blind, and according to doctors, may never regain his eyesight.

Join me for Friday April 10 at 5:00 PM E.S.T. for the third Friday Live Stream! This week we will be tackling the complete discography of a beloved metal band, looking at some special musical rarities (CD and vinyl)…and something craaazy.

Due to popular demand and nothing better to do, I’ll be live streaming again tonight on Facebook.  This time the stream will start at 8:00 PM Eastern Standard Time and possibly run til 11:00.

Last Friday‘s stream was fun for all.  It included features such as:

What will tonight entail?  It’s entirely unscripted so who knows?  (I wanted to do an unboxing last week but that idea went down like the proverbial lead zeppelin.)

Check out Facebook (I’m “Michael” there) and tune into the live stream at 8:00 PM EST.

We’re all in this together.  For your entertainment, and let’s face it mine too, I will be live streaming on Facebook tonight at 9:00 pm Eastern Standard Time.

We tried this last week, sort of an impromptu live session and it was fun!  There were loads of music questions, lots of air guitar, great comments, and even a couple of my rock heroes stopped by to see what was going on.  So what’s up for tonight?  That’s up to you, folks!

How long it goes will depend on how many people are watching; I’ll call it a night if it’s a slow one.  Otherwise we could go until midnight.  I’ll be pulling the plug then no matter what, so I can watch Rob Daniels live show on Visions In Sound.  He will be playing the music of Star Trek: Picard by Jeff Russo.  You might want to make sure you catch that.

I will admit the longest I’ve gone (haha!) is an hour and a half.  Never done three hours before.  So this will be interesting to say the least.

Look for me on Facebook — I’m Michael there — and tune into the live stream at 9:00 PM EST.

I’ve been making videos for over 30 years. It’s important, when possible, to keep your source material. It’s necessary if you ever feel like revisiting your work. Or, if you feel like presenting “previously unseen material” to your audience as new content.

Here are some outtakes representing the last 30 years of making videos. You’ve never seen ’em before and I hope you enjoy! 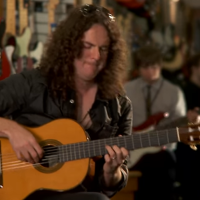