History cannot be buried forever.  Eventually, atrocities are brought to light.  This terrible secret is no longer hiding in the dark.  It has shown the world that even the great nation of Canada has skeletons.  Tens of thousands of them.  Children, taken away from their families, and forced to assimilate.  Forced to lose their language, culture, and way of life.  All in the misguided and shameful effort to “civilize the savage” and “bring the heathens to God”.  Thus, “saving” them.

Thousands of these children never came home from the residential school system.  How many?  With bodies being unearthed daily, we may never know the true tally.  If Gord Downie were alive today, what would he have to say about these discoveries?

Downie and Jeff Lemire tried to tell us.  In 2016 they released Secret Path, a gorgeous and painful graphic novel to accompany the Downie album of the same name.  The book comes with a download code so you can listen along, and read the full lyrics.  It is the story of Chanie Wenjack, Anishinaabe by birth, raised in northern Ontario.  The residential school forced him to change his name to “Charlie”.  This is not ancient history.  This only happened in 1966.  The Beatles were the biggest band in the world.  Our parents were living normal lives.  Meanwhile, Wenjack and thousands like him were abused and tormented at residential schools all over the country, not even afforded the dignity of their own names. 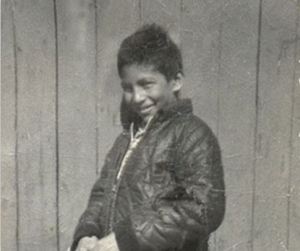 The book has no text other than the album’s lyrics.  Listening along is the best way to appreciate the rich images.  You must take time to study the lines and shading, for each page is rich with beauty and detail.

It was October of ’66 and the story begins with Chanie already on his way home.  Alone, following the train tracks, Wenjack is illustrated in stark black, blue and white.  The trees are bare, and ravens circle free overhead.  Chanie’s story is told in the form of flashbacks.   His thoughts go back to happier times, fishing with his father.  These memories are in full, beautiful watercolour.  Lemire captures the love in his drawings. 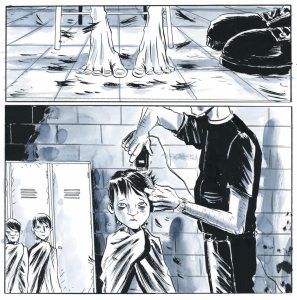 Chanie’s memories then go back to his first day at school.  Like a prisoner, he was issued a new haircut and new clothes.  His sorrow leaks through the pages.  He then thinks back to the morning of October 16.  Unable to tolerate any more abuse, Wenjack and two friends made a run for it.

They stayed briefly with the family of the other two boys, but Chanie wanted to return to his own home.  On his own, and only with a railway map, a windbreaker, and a jar with seven matches inside, Chanie followed the rail.  Only seven matches.

“As long as there were five.”

“As long as there were four…” 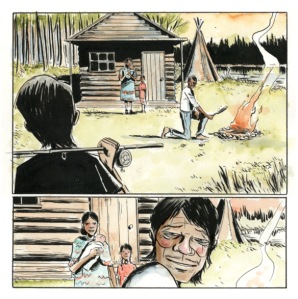 His thoughts return once again to the school.  Sexual abuse is alluded to.  Chanie continues to run on his secret path, but he also tries to escape from his memories.  They are never far behind.  Only happy dreams of his father bring warmth, and they are gloriously painted in fall colours.  As he weakens, hallucinations manifest, both good and bad.  He wishes for revenge, and to see his father one more time.  The raven circles overhead.

While there is no way to really know the thoughts and feelings of Chanie Wenjack during his final walk, Secret Path is not a work of fiction.  It happened.  And now we know that Chanie is one of thousands.  Chanie Wenjack did not die on that train track from exposure to the elements.  He died of genocide.

If this book does not make you feel, then consult a doctor because something is wrong with your heart.

Happy Canada Day from LeBrain HQ to you.  I know this is rough one, a weird one, and a difficult one.  I’m going to ignore the current goings-on and everything else that has to do with Canada Day, and present to you Eleven Canadian Songs You Need to Hear Right Now.  Enjoy!

It’s Canada Day up Canada way. I hope you had a safe and happy one. Here’s what I did on my Canada Day vacation.

It’s Canada Day up Canada Way, and I’d like to share a story about one of our neighbours who always celebrated Canada Day with us.  His name was Mr. Evans, and he was actually American.  His cottage was across the street from ours, and he made sure to do a massive fireworks display on the long weekend.  It was Canada Day and 4th of July all in one.  Mr. Evans and his family spent hundreds of dollars on those fireworks every year, probably close to a grand.  And they were American fireworks:  bigger and brighter than ours, not to mention illegal up here!

The rockets’ red glare, and bombs bursting in air, united our countries together in friendship every July long weekend.

Mr. Evans was always good to us when we were kids.  There is one story I’ll never forget.  It was about soda pop.

“Up here in Canada, you can buy raisin pop,” he told us.  “You can’t get it in the United States, only in Canada, so I make sure we buy some every time.”

Raisin pop?  None of us had ever seen, heard or tasted such a thing!  But he insisted it was real.

But our American friend missed something.  In Canada, everything is bilingual.  Boisson gazeuse: “Raisin” is “grape” in French.  All he found was a case of ordinary grape soda!

This is how we did Canada Day celebrations.  Burgers, sausages, cake and all the fixin’s! 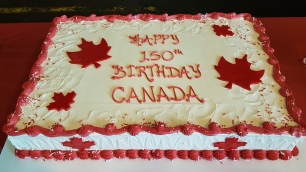 Happy Canada Day! Here is your Can-Con for this holiday: The Legendary Klopeks. According to bassist Mike Lukacs, “We used to always play Shannon [Larratt]’s Canada Day BME BBQ every year. Always liked that.”

For a review of the Klopeks’ first album Homicidal Suicidal Klopekticidal by Aaron at the KMA, click here!

Once upon a time, in Niagara Falls Ontario, there was a band.  This was a band unlike any other.  They were fronted by future Guinness’ World Record holder Sweet Pepper Klopek.  Sayeth the Huffington Post, “Sweet Pepper Klopek…has set many Guinness World Records [and] managed it again by lifting a 5.4 kilogram, or 12-pound, sledgehammer suspended from two huge fish hooks plunged through his cheeks.”  Mixing punk rock, wrestling and humour, their best album is the 24 track Straight to Hell.

Every song ends with the words “fuck you!” and almost all are under three minutes.  There are also several tracks only a few seconds in length, and yes, even they end with “fuck you”!  Some sample song lyrics:

For the record, “Where’s My Soup” has long been this writer’s favourite Klopeks tune.  For a while I considered getting a “Where’s My Soup” tattoo.  A tattoo shop in St. Catharines Ontario used to offer free tats to anyone getting Klopek ink.  And I did consider it, but ultimately decided against.  After all, how did I know that in 10 years time, my favourite song wouldn’t be “Terry and the Ass Pirates”?  Or “Bush Party Hand Job”?  Or “She Fell Off the Couch” which has an actual guitar solo?

The fact of the matter is, every song is fast, brittle, vulgar and incredibly fun.  The lyrics are fuck-laden beyond conception.  The Big Lebowski himself has never dropped so many F-bombs in just 33 minutes. Nothing is taken seriously. Most songs start with bass noodling via Lemon Kurri, moving on to Sweet Pepper screaming like a man possessed. Regardless, these are actually really good punk songs! There is nothing polite or safe on this CD — that’s why they called it Straight to Hell!  No apologies.  “When it’s all said and done and I’m dead and gone, life’s a fuckin’ game, and fuck you I won!” 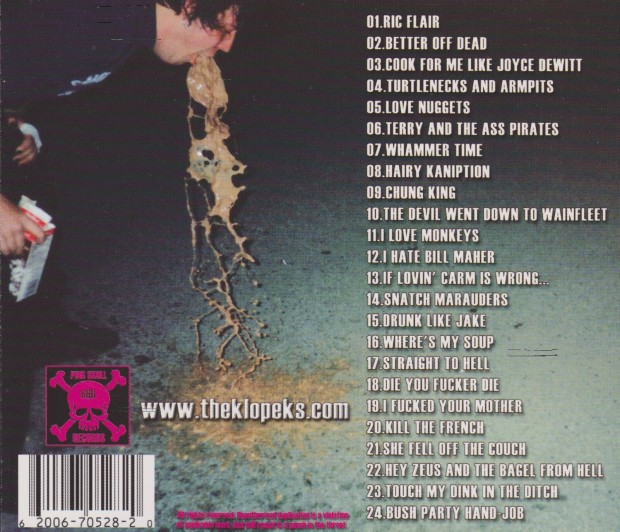 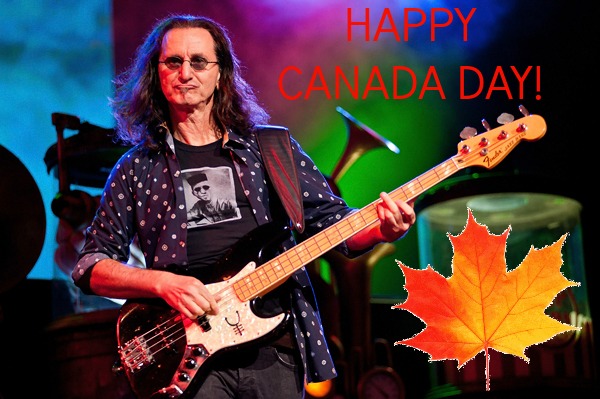 In the continuing saga of all the pets in the greater LeBrain clan, you may recall that Lil’ Shit was the most recent addition to the family.  Bass clarinetist extraordinaire Kathryn Ladano recently acquired Daisi aka Lil’ Shit, below.  I finally got to meet Daisi this past Canada Day weekend!

It was a great weekend full of bonfires and awesome Canadian scenery too. 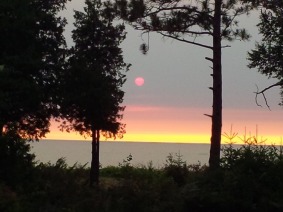 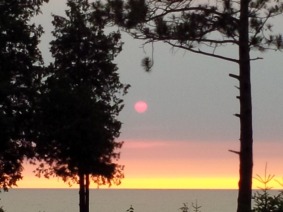 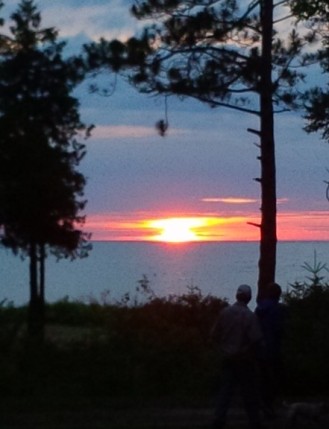 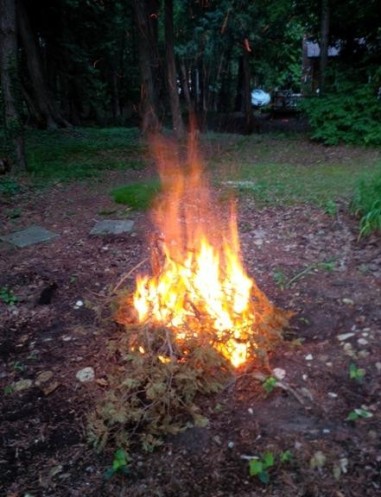 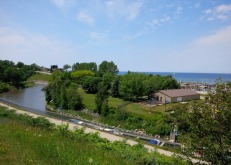 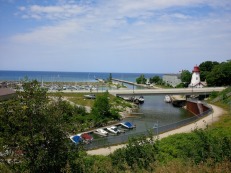 Canada Day Weekend, 1997.  Rush were closing up their final bunch of dates on Leg 2 of the Test For Echo tour (June 30 and July 2).  Tom, myself, Trev, and several other record store guys had the whole weekend off and went to see Rush on the Monday show, which was the first of the two shows.  Outdoor show, at Molson.  We did not know that a few months later, Neil Peart would experience unbelievable personal tragedy.  For years, it appeared that we had seen some of the final Rush shows, ever….

One of the guys,Troy, brought his younger brother Tyler. Tyler worshipped Zeppelin.  Still does.  He named his (black) dog “Zep”.  Back then, he was 17 and had never heard Rush.  He thought Bonham was absolutely the greatest drummer who ever lived.  We told him, “Tyler, Bonham was god-like.  But you haven’t seen anything until you’ve seen Neil Peart.”  He scoffed.

We brought some beer in the trunk of the car, and snuck into the bushes and had some drinks.  We stumbled into several groups of people in the bushes, drinking, smoking (cigarettes I’m sure) and partying.  It was great.  We were all there, every one of us, to bask in the glory that is Rush.  It was a giant communal party.  Some people were already out of it, and slurring, “Duuuude…they’re gonna play 2112 dude!  We are the priests of the temples of the sphinx! (sic)”

Indeed, I had heard from one of my customers at the store, that Rush were playing all of side 1 of 2112 on this tour.  What would that sound like?  Could Geddy even sing it anymore?

There was no opening act.  There was instead a brief intro before Rush hit the stage to “Dreamline”.

At the halfway point, Rush did indeed play side 1 of 2112 (as chronicled on their Different Stages LP).  They took a brief break before coming back to finish the show.  These being the last Toronto shows of the tour, the roadies were out there clowning around, playing with puppets, all to the delight of the patriotic crowd.

Of course, the Professor did his unbelievable drum solo.  This was around the time that Freddie Gruber had been teaching Neil, and Peart was beginning to feel jazzier in his style.

Tyler was blown away.  “You were right…that guy was almost as good as Bonham!”

Tom and the rest of the guys were so blown away, they actually bought some more tickets from scalpers and came back to see the second show on July 2.

By far, the best and most patriotic Canada Day Weekend I ever had was seeing Rush.  What could be more patriotic than rocking to Canada’s official ambassadors of music?